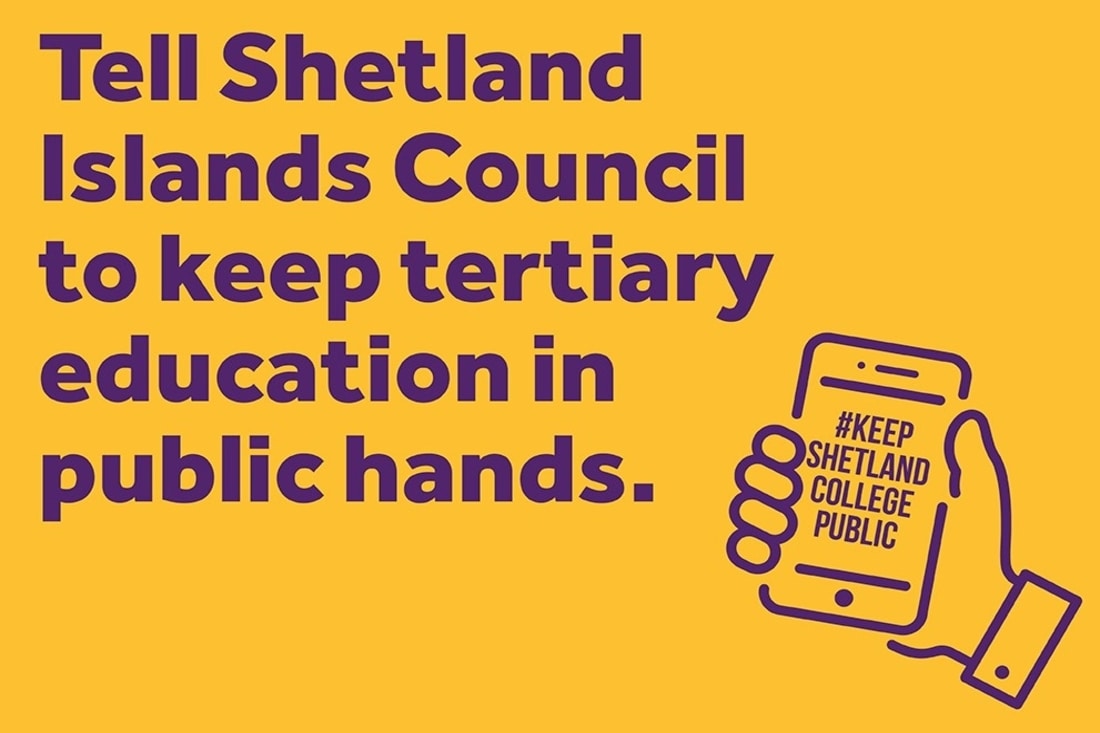 In this article, the EIS-FELA Branch Secretary for Shetland College, Andrew Anderson, explains why our campaign to Keep Shetland College Public is more important than ever.

The campaign to ensure that Shetland College does not become the first further education establishment to be privatised anywhere within Scotland has been continuing apace during the lockdown period.

Shetland Islands Council were due to consider the Ministerial Merger Business Case (MMBC) on 26th March but this meeting was cancelled due to the COVID-19 crisis. The council then took the extraordinary step of re-arranging this meeting for 22nd April, only 2 days after a “tick box” exercise Joint Consultative Committee (JCC). This was only the second consultation meeting on the college merger process in Shetland – since December 2018! Moreover, the only other JCC meeting that was held, was only agreed to after repeated requests from EIS-FELA. We have consistently raised issues about this lack of genuine consultation and due diligence.

As expected, at the council meeting on 22nd April, they waved through the MMBC, including the recommendation that the new merged college be non-incorporated. The meeting was held remotely and EIS-FELA were denied permission (previously granted for the meeting scheduled for 26th March) to even observe the decision-making process taking place – this contravened the council’s own principles of openness and transparency and flew in the face of democratic principles.

Despite repeated attempts, the council officials and elected members simply ignored the fact that the MMBC’s five-year financial projections were unsound, due to the massive impact COVID-19 has had on the economy and financial markets and will have on future student numbers. What is equally concerning is that it became clear, during discussions with some of the councillors, that they had not been fully informed about the differences and possible impacts between incorporation and non-incorporation. For example, Audit Scotland’s report of 2019, which highlighted that non-incorporated colleges are struggling financially as much or even more so than incorporated colleges.

More fundamentally the false perception that the private sector represents the safest and best value provision of essential services has been exposed by the COVID-19 crisis. Many private companies and charitable trusts are on financial life support, their staff furloughed at government expense, their long-term survival in doubt.

The college’s merger partners, the NAFC Marine Centre are, according to their Board of Trustees, in danger of being wound up. This situation forced the council to consider a report in private that proposed a rescue package for NAFC Marine Centre – the bitter irony of a public body being asked to bail out a private company limited by guarantee has not been lost on EIS-FELA members.

The council decision was expected, but we are now entering the next phase of the campaign and Shetland College members are extremely buoyed by the incredible response to the day of action held on Tuesday 21st April. Thousands of folk tweeted their opposition to the proposed privatisation, using the hashtag #Keep ShetlandCollegePublic and well over a thousand emails were sent to Shetland Islands Council councillors stating, “The EIS-FELA Shetland branch (comprised of Shetland college lecturers who are also constituents and the electorate) are opposed to privatisation on principle because it is likely to negatively impact staff terms and conditions and security of employment as well as students’ quality and diverse range of education”.

The most important stage of the decision-making process to merge the college with Train Shetland and NAFC Marine Centre has yet to take place – the Scottish Government are now responsible for the statutory 24 week consultation period – however, due to COVID-19, the revised timescales for this, and any new vesting date, is yet to be provided by the SFC.

The campaign we have run has successfully highlighted the depth of feeling from staff, students and the wider public, in opposing the college being privatised. This has created an excellent launch pad for the next stage of the campaign.

It is the Scottish Government who will ultimately make the decision on privatisation and without the high-profile campaign we have had, the task of persuading them to keep the college in public hands, would have been considerably more difficult.

We look forward to taking our campaign forward and ensuring that we are not the first further education college to be privatised in Scotland. We thank you all for your support – the fight continues!